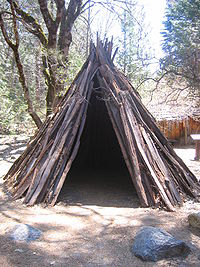 Yokuts tribes populated the San Joaquin Valley from the Sacramento-San Joaquin River Delta south to Bakersfield. They also lived in the adjacent foothills of the Sierra Nevada mountain range, as well as in the foothills of the Coast Range. They were thought to have had one of the highest regional populations in early North America, and shared a common language. Though there was conflict in the Central Valley between Miwok people and new settlers to the area in the early 19th Century, the Museum exhibit is in honor of our Native Californians. 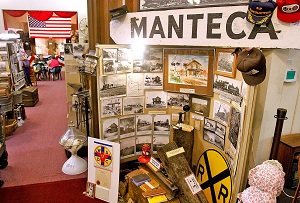 The first railroad was the Southern Pacific that provided the vital transit link to ship milk to San Francisco and produce and sugar to the East Coast markets. The Tidewater Southern, which served this area, was opened to freight service in October of 1912 from Taylor Street in Stockton to Modesto. 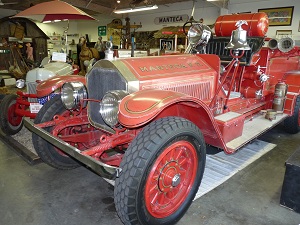 Manteca’s first brand new fire engine #876, is housed at the Museum and is still used for special occasions and parades in celebration of those who served to protect our citizens.

Founded by Gasparé Indelicato in 1924, Delicato Family Vineyards has helped make Manteca a destination place for nearly 90 years. Today, Gasparé’s original vision continues with the third generation of Indelicato family members. Grapes are one of the area’s top crops. A vintage display can be seen in the museum and not far away along Highway 99 at French Camp Road, you will find their tasting room! 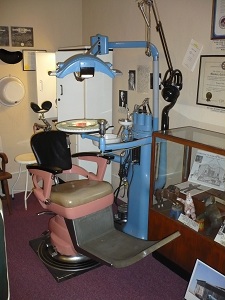 A 1930’s vintage state-of-the-art dentist chair owned and used by Dr.Lloyd Henry is displayed at the museum. Donated by Dr. Richard Cuevas. 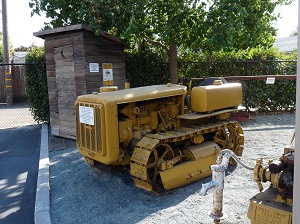 This original 40” narrow gauge Tracklayer 3400, with it’s giant 38 HP engine, Was used in the fields around Manteca and Roberts Island by the Frank Avilla Family. Donated by Rhonda Avilla. Rustic Outhouse “Privy” Circa 1939. Built by Jim Tocco to replace another, this was a well-known part of farm and even city-living at one time. Donated by Ed & Margaret Tocco-Sequejra. 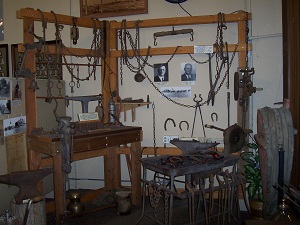 A complete display from the Goodwin Ranch, with some items dating back to Benjamin Goodwin, the pioneer, who the Goodwin Dam was later named after. Donated by Ben and Neva Goodwin. 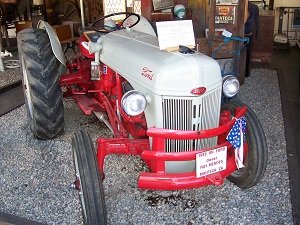 Agriculture was and still remains an important part of Manteca’s economy. Pictured is a 1949 Ford Model 8N Tractor, first sold to Harvey Smith by M & J Tractor Co., who then sold it to Frank Mendes in 1961. Restored by Ray Mendes, and on display at the Museum.

One of the first large companies to locate in Manteca, the Spreckles Sugar’s Manteca Factory No. 2, was a part of the community for nearly 80 years. Now named Spreckles Park, the re-developed southeast area of town continues to provide jobs in retail, agriculture, warehousing, medical and housing, while preserving the brand of its namesake, which shared an important role in Manteca’s history. 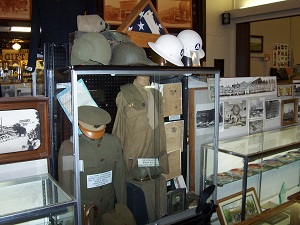 Many Mantecans answered the call in World Wars I and II, Korea, Vietnam, and more recently in Iraq and Afganistan. We remain free because of our Veterans. The Museum honors all who have served, and those now serving our great nation. We pray for a safe return. The Museum thanks all military-exhibit donors. 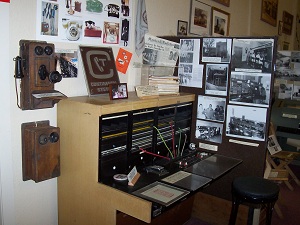 A new state of the art switch-board system was used in the late 50’s. Even though it was the most modern of designs, the operator still said, “number please” when you placed a call. Donated by retired SJTC employee, Ann Scharmann.

With roots in Manteca dating back 50 years, Doctors has been one of the areas primary medical facilities allowing patients to receive many medical services here, rather than having to drive to other cities.